Norman Mailer once posited, in so many thousand words, that our greatest ally in making critical decisions in circumstances both highly consequential and immediately threatening is instinct. He told us that “anyone in the city,” and anyone else who might hope to assume the mantle of cool composure, must rely on it. He might have scoffed at our present problems as trifling by comparison, but I say that’s true now more than ever.

There’s been a phenomenon on these Detroit city streets of late, although surprisingly less visible now that election season is upon us, known as the Trumpmobile. A garish bandwagon of red banners and reams of Old Glory, it races around town blaring false virtues at high volume, interspersing them with the occasional gratuitously laid-on Motown classic, as if that’s going to fool the people. It doesn’t.

I don’t want to dwell on the topic of privilege on this website, partly because it’s tedious, partly because it’s a hornet’s nest of bad attitudes with no apparent exit, but I am reminded of the notion when I see the Trump-wagon. It’s here that instinct plays its critical role, for me and for others, rushing in with flashes of reason to decipher our mistrust. I have the luxury of walking away with a light mocking attitude that people in this day and age can be so disastrously noisy in their opinion-making. Others are less fortunate, however. Those unfortunate enough to be burdened with the notion that, seeing the Trumpmobile, they must change their lives or be displaced must certainly feel the all-too-familiar pangs of existential concern.

Devoted readers of this smear on the sideroad of the bustling and florid superhighway of American politics, and there are an extreme few, will remember a post from exactly two years ago. Now lost in the ether of format changes and the shreddings of at least one nefarious hacking, it had mostly to do with the concept of Black Flag. The band, and the one hoisted by American foes across not-too-distant seas. It painted the picture of a grievous, if not too far-fetched, correlation. One which stated that dogmatic political conservatism, something to be fought against, quite literally, in the time of Black Flag, might be in dangerous ascendance in the time of American political populism at home and jihadi theocratic fascism abroad. It proposed a mordant conceptual union, then, between ISIS and the Alt-Right, a twin-headed hydra of fundamentalist ideals that would seek to erase anything and anyone outside of their purview. The irony would certainly be lost on the fools in charge of running either camp. The darkest core of the argument made one thing clear however: that populism, as witnessed in Al Qaeda or the Alt Right, as witnessed in the greatest atrocities of the twentieth century, will always attempt to scapegoat the Other out of existence.

Don’t let them fool you—voters that support modern-day conservative national populism may be full of claims that all they want is “law-and-order government,” or one that’s “great for the economy.” But that’s just back-pedaling. (Hey, I live in Detroit. Who doesn’t want these things?) Indeed, the starting points for current Alt-Right politics may be traceable to the Nixon and Reagan administrations, with their notions of law-and-order government and big-business politics, but it’s with a hefty dose of George Wallace thrown in. With a desire to maintain the social status quo at all costs, our current administration takes its cues from this unholy trinity, one that should be no less reviled now than it was back then. The political camps in question were a backlash against the struggles of the day: civil rights, war protest, rising civil unrest, the environmental movement. The most poisonous and mendacious low points in the history of American politics are where the current administration and its slavering followers takes its cues.

Have you ever wondered what the “Again” means in the ridiculous slogan “MAGA”? The current administration wants to take us back in time to a road less taken. In short, its greatest desire is to make everything 1950 again so we can start all over. The Alt-Right claims to want a revolution, but what it wants is an anti-revolution, one that would turn back the clock five decades.

It’s not hard to be confused and distraught by the social landscape of the modern world. For members of the new right it’s harder still, in their turn existentially harder, for their very beliefs and identity have been called into question by the shifts and turns society has taken. The fire that burns brightest at the heart of the Alt-Right consciousness then is the fear of cultural displacement, of cultural irrelevance. The social machinations of the day are of the sort that seem contrived, almost by design, to make the blood boil in the average mainstream populist: There’s a pour-over on the corner of every big city and town, where people are known to be reading The Times. Beyoncé and Jay-Z, figureheads in some sort of “New World Order social élite” are treated like royalty, and on the television Kendrick Lamar is seen blowing up the stage in a kind of tribal conflagration. Women have been spotted roaming the Five n Dime in full burka hijab, and our classrooms have gone from being the safe and bland melting pot of years past into the full-blown multiculturalism of today. Identity is everywhere, but it’s other peoples’ identity, an affront.

I contend it’s these kinds of welcome transpositions of culture which have always made America great.

Designed to keep things honest, to keep value dynamic and progressive, these societal tremors rattle a mainstream populace for whom relevance has always been questionable. A mainstream which cannot claim, now or possibly throughout its chequered past, to occupy any moral high ground. In short, it’s cultural evolution, in a landscape where an evolution of ideas and attitudes has always been overdue.

The Achilles heel, then, of the populist movement: It is nothing more, nothing less, than Identity Politics. A conspiracy theory–filled agenda, whose blood burns hot with the desire to restore or retain privilege where it can, and remake society in the image of times past, of roads not taken. Nevermind the great irony that Identity Politics, a questionable strategy to begin with, is one borrowed from the sworn enemy of populism, the Liberal Left. In this case, the populist mainstream is Identity Politics reimagined at its worst, writ large, all-encompassing, and bland. It is the new “silent, moral majority,” one that is neither silent or moral.

Don’t take this as a diatribe of despair. The times we live in are as exciting as can be, when you think about it, even in light of all the misery, mistrust, and fear, because inevitably, change will come from all this. In the challenges we face at home, we may just be able to outlive and overthrow, with effort, the oppressive, vulgar and retrograde autocracy that is the New Right, perhaps even learning something from its diabolical but seemingly inevitable lessons. The attitudes and actions of crypto-fascist jihadis from abroad may in turn urge us to examine our own greatest societal shortcomings and failures. The loss we have for meaning in the moment, the dearth and hollowness of our fragile modern spirituality. All of it speaks of change. I might even be willing to vote, with enthusiasm for once, for whoever inherits the mantle of our current presidency, whether it be a latter-day Bernie Sanders or a current-day James Mattis, or some odd combination of the two. As opposed to what we have now, instinct tells me I would at least be voting with a clear conscience.

In the meantime, no one is immune to what is happening:

Ontario just elected Doug Ford its Première, someone who sits slightly to the right of this country’s president and perhaps further afield in lunacy, and big-business Canadian oil is as happy as a lap-dancing hooker at Leopards Lounge to turn over the Alberta tar sands to the highest bidder, and all with the same blithe, “Who, me?” insouciance as it does so. American news media, notorious in its inability to explain why our mendacious leader is obsessed with courting a friendship with the Kremlin, attempts instead to frame the White House in some pointless, latter-day Watergate. It ignores the real allure the two despots have for each other. The two autocracies have an alliance of ideals. They would elicit a godless pan-national nativist union stretching from the American heartland, across Brexit and Central Europe, and into the arms of the New Russian shopping mall proletariat. And although Marine Le Pen would doubtless look away in disgust at the vulgar diet of hambourgeois and coca-dièt that nourishes the stamina and decision-making of our president, she’s a big supporter nonetheless.

No, you need look only as far as Caesar’s Colosseum, where Cheap Trick and Foreigner have upcoming dates. And the fact that every single for-shit Windsor wanker I went to high school with will be there. 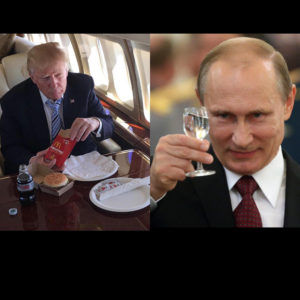 remember when you vote.