Only In Detroit, v.2

New music has always been misunderstood and maligned, none more so than what is commonly known as ‘techno.’ I have a friend, whose opinion I generally respect, who pretends to find it so childish that he always says the word in the voice of a preteen dork. ‘Ooo, teck-noh,’ he says, an attempt to disparage an entire genre in three syllables. Much of it, known more broadly as EDM, is utter rubbish, however. A type of co-opted disco music best suited to frat boys on the make, in for the weekend at some nasty Las Vegas mega-club. In general, prejudices run deep here, and sometimes rightly so. But imagine that everyone who ever mistrusted rock-and-roll equated their understanding of the genre solely with the music of Steely Dan, say, or The Eagles or Mötley Crüe. It’s the same thing. They’d be dismissing a lot; allowing the worst elements of the mainstream to set the benchmark of their prejudices. 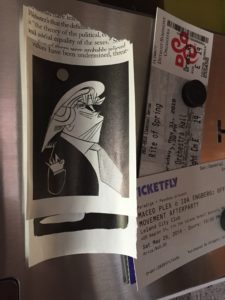 president approved. Or is it.

On the weekend a music festival showcasing everything electronic rolled through Detroit. The highlight for me was an evening spent inside Leland City Club, where, it being four or six a.m. among other things, strange realisations always seem to take hold. Ida Engberg, a German dj, was stoically in charge. It’s strange and intriguing to see a single individual, in what is quite literally the opposite of a “performance,” pointedly controlling such an array of machinery. It was a wall of sound and an oddly asexual performance, a lone teutonic blonde gracing us with a fierce sonic landscape. Maceo Plex, widely revered, followed to great acclaim, darker and even creepier, a more ‘masculine’ sound as my companion for the evening pointed out. It was two artists exploring the heights of what this music can mean.

Last night the DSO performed “The Rite of Spring,” which they perform all weekend. Most people are familiar with this piece, which is legendary for verging on the chaotic, and legendary for the fights that broke out at its première. At some points it does seem like chaos, magnificent chaos or designed chaos, pursuing an intentional sense of direction. The stage was packed full with the largest orchestra I’ve ever seen, filled end to end and from corner to corner. The music makes its impact through dissonance and musicality, certainly, but also through sheer volume, and, most strikingly, through orchestration. It’s performance art for the orchestra, as visual as it is musical. The printed score for this music is black with notes, and, hearing it, one wonders if Stravinsky nearly invented what we know as modern musical rhythm. After all, a girl dances herself to death in this piece. 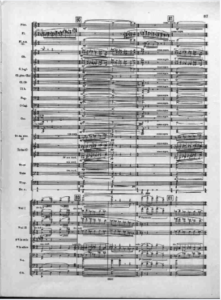 page 81 from The Rite of Spring, black with notes.

I don’t know who came up with the policy that drinks from the nicely stocked wet bar on the Orchestra Hall mezzanine can now be taken back into the auditorium for consumption while you listen, but we salute them.