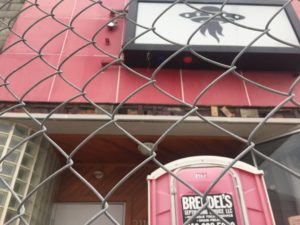 About twenty years or so ago you couldn’t really get a decent Italian dinner in this town. Can you now? More on that later perhaps. In Detroit, if you had a mad craving for linguine alla vongole it was Mario’s, or Giovanni’s, or bust. Don’t even get me started on Mario’s. I love the place, in a way, but that’s because it satisfies a specific set of perversions which the diner in me likes to celebrate on occasion. So yes, I have an appreciation of Mario’s, but it’s one that does hover on the boundaries of perversion. The savvy diner, however, feeling only slightly adventurous, could take a quick trip across the river to the small Windsor enclave known as Erie Street. It’s only slightly shabbier now, and, certainly, the famed espresso at Sorrento has been rivaled, if not even surpassed, by that served in the trendy but authentic Detroit coffee hotspots Astro or Great Lakes. But back then, Windsor was our only option.

It’s an astute type that knows about these things, and Tony Soave is one of them. Our favorite haunt was Il Gabbiano, and there he would be as we finished our perhaps third round of after-dinner grappas, peeling off some bills from a ‘Kansas City roll’ of stacked hundreds, before we all headed back across the border. A genteel nod, and he was off. I’ve had close contact with him before and since, and he always seems quite nice. Polite and friendly, possessed of a preternatural calm, even as the gleam of his wife’s diamond ring all but blinds you.

I’ve had passing contact of a similar sort with L Brooks Patterson, although I was led to believe that he would never step foot in Wayne County. Although he fought a war in the streets with Coleman Young throughout the ’70s, a war he managed to win, he seems typically backward on modern progressive initiatives, such as regional mass transit and urban living. To my surprise and betterment, though, I found that, when presented with courtesy and genuine attention, he was very polite and courteous in return, cautiously friendly even, and quite generous. Now this does not mean I will ever, in a thousand lifetimes, vote in Mr. Patterson’s direction or subscribe to his social agenda of old-guard suburban values. What fascinates me, though, is that there is a meeting place, perhaps in courtesy, where otherwise discordant persons can find common ground. An open-mindedness that lets us find what it really means to seek out our better selves, for us and the world around us.

We inhabit these better places through a desire to understand one another. In short, these men responded to something to which all humans will naturally gravitate, the idea of mutual respect. A cornerstone of this is a rule I try to follow, and often with great difficulty, but which is appropriate to our disparate times: Never assume the worst.

Another phenomenon of the era I mention above was the dive bar, and back then it was ubiquitous and authentic. This wasn’t the nonsense we see today, places mostly inhabited by frat boys and their baffled but occasionally darling coed girlfriends. Things were different then. The people were real, akin to adventurous survivors. Everything was properly, even absurdly, priced. El Chaparral, the Bastille Bar, Carnival, Charlie’s Bar—old-school Detroiters will remember them well. My father, a genius at sussing out such places, held to them because they were what they should be. Dark and anonymous by day, ragged and a bit unsavory at night. An absence of the straightlaced average citizen was part of the appeal. They would have been welcomed, certainly, as this was a milieu that had a particularly democratic air, something which, I’m sure, appealed to my father as well. But a certain type would always stay away of their own accord. Things weren’t tidy enough for them, nor was the crowd, about whom it was easy to assume the worst. Alas, attitudes haven’t changed much, and have perhaps deteriorated further, but one thing has changed, and not for the better. That unique locale, the dive bar, representative of a specific and wonderful type of city living or country living, is becoming scarce.

Sitting smack in the middle of one of the great construction revivals of the Detroit renaissance is a forlorn cinderblock building that once housed the UFO Factory, on the lower end of Corktown. Formerly Hoot Robinsons saloon, a place that I never had the privilege of frequenting as it was shuttered decades ago, The UFO suffered severe structural damage at the hands of the surrounding construction crew. Rumours circulated that, having not heeded warnings to move out, the damage might have been intentional. The UFO, refusing to sell, wanted to hold on to something it saw as valuable, a gritty little bar with a low-rise stage, and a menu comprised mostly of hot dog offerings, although some iterations were vegan and some offered kimchi. Perhaps the powers that be, a company owned by Tony Soave, saw these things as inconsistent with the shiny quiet living that appeals to the modern-day condominium owner.

At this publication we disagree. The condos will sell, perhaps the more so for having a unique and inviting bar right in their courtyard serving as its local, a restoration that we hear may be on its way. As gentrification creeps in, sometimes at an alarming pace, sometimes with the constructive intent of rescuing us from the ashes, we need to remind ourselves that we don’t want things to go sideways as it has elsewhere. Occupancy and services are on the rise, but so are rent prices and disregard. If soullessness or ruthless entrepreneurism accompanies any of it, we could have a problem, and the uniqueness of Detroit could be compromised. A local bar presents a great service to its milieu and its employees, as a meeting house, as a vibrant locale, and, in the case of reviving the UFO, as a place that will get its former employees off the couch and off of the dole. Some of the people from my past whose opinions I’ve respected the most will agree. The Swankys of the world, my friend Tim D., my dad.

It’s simple, then. Dive bars are good for the soul. Whether deep in the city, or out in the happy reaches of country life or small town, they’re the antithesis of the sterility of postmodern, plastic-clad, suburban life.

–A special thank-you to MLH, the Lone Star Parson, grand afficionado of especially smooth-topped bars, for keeping the Hawkwind term Space is Deep alive and well.

6 thoughts on “Space Is Deep. A Plea for The UFO Factory and Beyond.”