This is meant to be an informal set of notes, the felt impressions of an experience, not an assessment of the technical formalities artists follow or employ. It’s the impressions of a moment, the ‘moment’ we’re in when we experience art of any sort, be it a painting, or a symphony, etc.

“If I weren’t the way I am, I shouldn’t write my symphonies.”

It takes a lot to say you dislike Haydn and Mozart, and I’ve tried to change my evil ways, I swear I have, but what’s to like? It’s not just that Haydn was cruel and dismissive of Beethoven or that Mozart’s music seems like something you play on Mother’s Day only. Rather, it’s the fact that they’re stereotypes of the genre: the music sounds the way everyone expects classical music to sound, and especially to the uninitiated. Long runs up and down the scale, trills, notes piled one upon another, music that ranges around, looking for a home key to end it all. Frivolities wending and weaving, never quite finding their way to substantive melody. Stuff that tends to promote about as much inspiration in the modern mind as Early American Colonial portraiture, say, or square dancing. I’ll make a few exceptions for Mozart (the 21st concerto, for example) but none for Haydn.

Beethoven triumphs over all of this, and hearing his Third Piano Concerto today made it all the more apparent. Because I like hyperbole, and feel I can get away with it in this context, I think it’s safe to say that he single-handedly ushered in the Romantic era with this piece, the era that would culminate in Mahler, Brahms, and Rachmaninoff. Written around 1800, it precedes even the groundbreaking Third Symphony and manages to sound almost “modern” because of its intense verve, the dynamic pursuit of individualistic expression. He would go on to write fourth and fifth concertos, and they chart the course of much of his work.

Of the two, the Fourth is gorgeous and unorthodox, ultra innovative in its opening notes for soloist only. The Fifth Concerto is a monstrous great beast, its opening bars the very definition of a ferocious sonic landscape.

The Third sets the stage for all this, unearthing everything that makes Beethoven what he is to concerto form. The intensely thought through and seemingly effortless ability to summon archetypal melody. The fevered, maniacal use of a large orchestra and complete use of the piano the keyboard, something which translates in apotheosis to a modern Steinway. The desire to imprint an artwork with impressions so distinct that they could come from only one artist, only one mind.

Alex Ross, music critic for the New Yorker, recently made a visit to Detroit to observe the startling transformation the city is undergoing through the lens of one of its most vital institutions. He noted that Orchestra Hall has “exceptional acoustics—a near-ideal balance of clarity and warmth.” Indeed, the music seemed to be coming at us from above, radiating in waves from the ceiling, and sometimes flowing from the sides of the room, from all around; the cadenza rang as if from everywhere, a nearly visual spectacle, at times ultra subtle, at times ferocious. Beethoven wraps all this ferocity in a coda that comes in like a song. As I say, the piece sounds weirdly modern, triumphantly modern, and not just because it influenced everything we know. Lortie, the soloist, signaled this, throwing his hands in the air in exuberance at the end of the last notes. 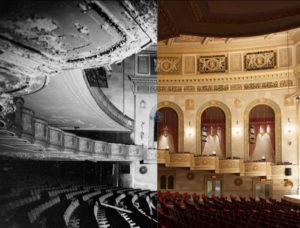 The balance of this concert is taken up with Scandinavian music by Rautavaara, Neilsen, and Jean Sibelius, and I’ve said this before: Of the many things I’ve learned to try and love in the past decades (Bob Dylan, success; The Dead, fail), Sibelius, whose Seventh Symphony was performed today, can’t be counted, and for different reasons than Haydn. Perhaps it’s the landscape that inspired the music: austere, withering, linear—a textbook description of music that always seems to me like listening to a frozen geometry lesson.

But the DSO, champions of modern and new music, also perform the “Cantus Arcticus,” “Concerto for Birds and Orchestra”, by Sibelius’ fellow countryman, Einojuhani Rautavaara, a piece that fairly restores our faith in Finnish music. Birds, recorded in choral song substituting inventively for a choir of human voices, suffuse what becomes mostly just a stunning crescendo. At its fullest, it attains the somewhat sweeping quality of Mahler, revised. Sibelius, whose music swells and dips, swells and dips, gray like an ice-cold sea, is left behind, by music that at least has blood in its veins.

The DSO performs this program tonight at Orchestra Hall with Louie Lortie as soloist.